Yip, the Chinese New Year has come and gone and is the year of the ox. It is the 2nd Zodiac sign in Chinese astrology. A fascinating thing is a person born this year is dependable, determined, and strong. To some extent, we have to agree, as you see it, with their architecture and designs.

The fact is that all the homes of the Chinese in pre-modern times have loads in common. First, you notice the unique layout found among rich and poor. Then the people used building materials with a colorful display, so if you’re looking to build a modern home, why not consider Chinese architecture.

Today we will look at what Chinese houses are with some great examples for you to consider when looking to buy or build one.

What is Chinese Modern House Architecture

When it comes to traditional Chinese houses, you can find countless types available, from old to modern. Throughout China, you find diverse Chinese dwellings.

Yet, it all depends on the Chinese culture, from the climate and terrain to materials used to build their homes. So, while each traditional Chinese dwellings differ, some things in the architecture remain the same.

A striking aspect of Chinese structure is using the practice of making their homes face south. Many of the Neolithic-period homes had rectangular south-facing doors. While the Zhou period homes also had a north-south axis.

While these type of dwelling no longer exist, the living spaces from the Ming dynasty has the same south-facing tendency. The fact is that this practice developed into feng shui geomancy, meaning wind and water.

Further, the material and location of the building played an important role. Some of the standard fabrics used in construction were associated with positivity, such as earth, wood, or both.

When looking at the foundation, you found it made with pounded earth or wood in rare cases. This is because people used soil in constructing the walls.

The people pounded the ground into bricks to form the walls. In contrast,e the roof you found depends on how wealthy the family is made from clay.

While in poorer areas, people use bamboo or thatch for roofing.

In most cases, wood was used for the framing to provide support for the roof. Using wood took place in the Ming dynasty and differed from other parts of the world. As the structure is essential, it determines the size of the home.

Further, the basic building block has spaces between and is defined by the roof support. You notice that makes Chinese houses distinct is that the number of bays is odd-numbered such as three or five.

So when you look at a three-bay home, it is a primary living space while the wealthy people would have a three-bay house with a courtyard added. Yet, no one could peek through the gate as it was completely closed with only a brick screen visible.

The main door did not line up with the inner quarters. The size of the courtyard also depended on the wealth of the person living there.

The Structure of a Courtyard House

When walking into a village where the inhabitants lived in a courtyard home, you would notice the following:

Now that you know where Chinese houses originated and have looked at the courtyard house popular in northern China and more, we hope you’re inspired. But if not, then let’s take a look at some modern Chinese homes to get you excited.

The Piano House By Hefei University of Technology 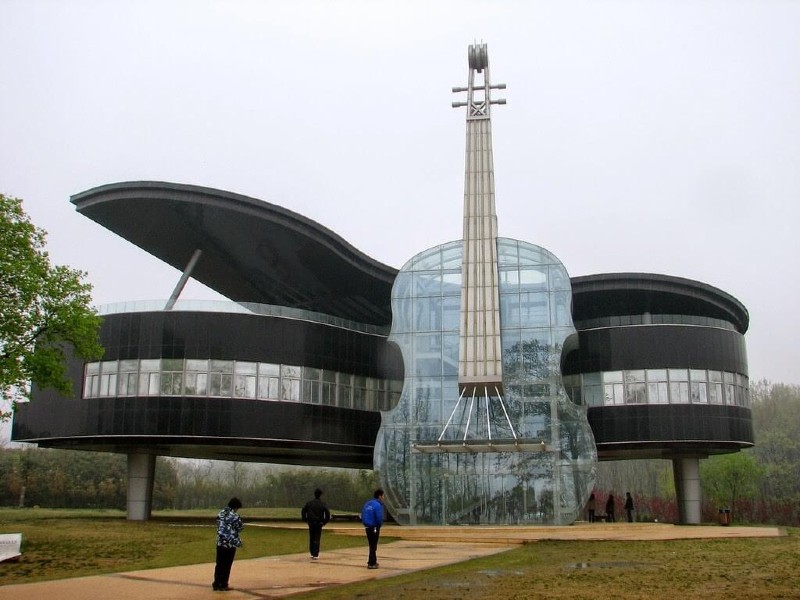 The Piano House is unusual, displaying a piano and violin design. The house was built in the region of Shanan in Huainan City, China, in 2007. Currently, it serves as an exhibition room for plans. With the transparency, you can see the staircase and escalators going up to the main building that is the piano. 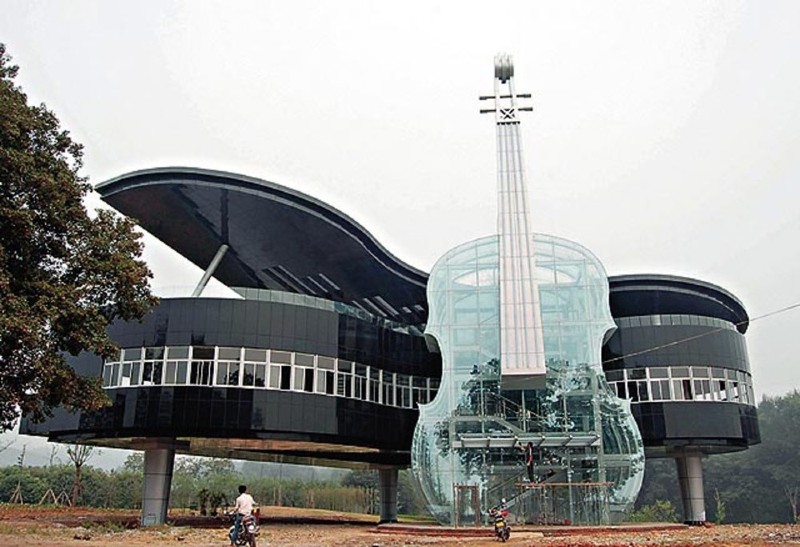 The place was designed by the Hefei University of Technology and constructed to a scale of 50:1. The buildings have become a tourist attraction, and even newlyweds have their photos taken there. It is one of China’s most romantic buildings. 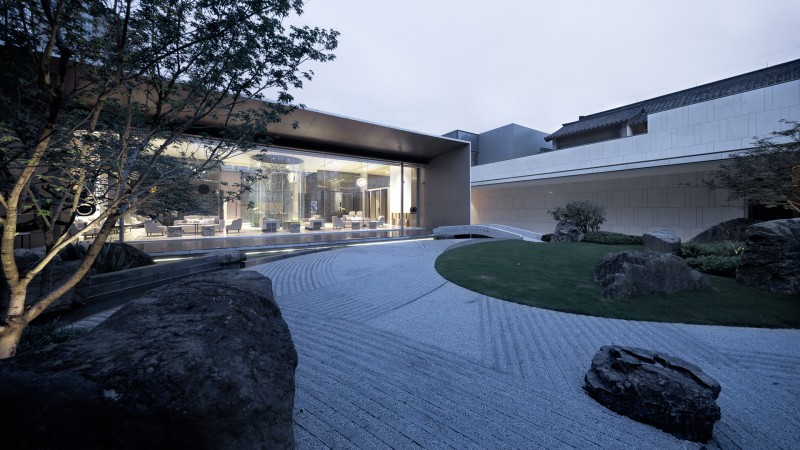 In Hangzhou, China, you find this fabulous space created by Gad the Phoenix Mansion. The modern place carries ancient history with a moat in the east and adjoins the Chaoming Temple located in the west. 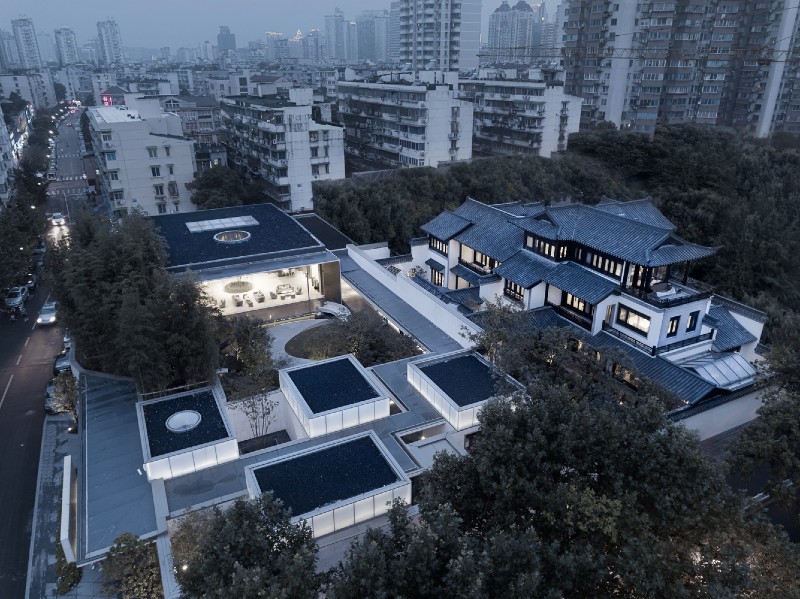 Two gardens face each other, leading into an elegant indoor space with a Japanese rock garden showing a fresh appearance.

When you look at this hotel, you would never think it was a sugar mill. The lodge is situated in Guilin, China, between two mountains that make up the Guangxi region. It is a popular destination for tourists enjoying the views. 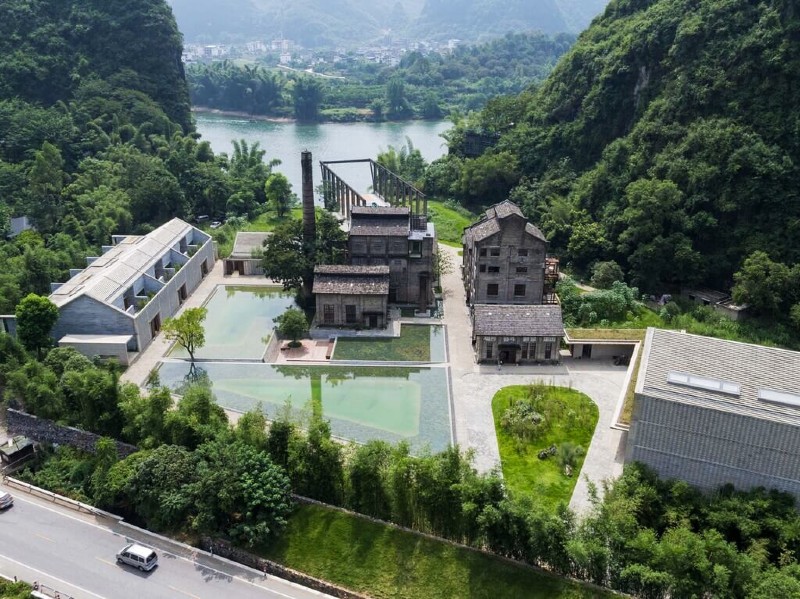 The original buildings now host the reception, a multipurpose hall, library, gallery, and cafe bar around a pond with a sunken plaza. Vector Architects used different materials to allow nature inside and bring natural light over the ponds, walkways, and more inside and out.

Baitasi House of the Future by Dot Architects 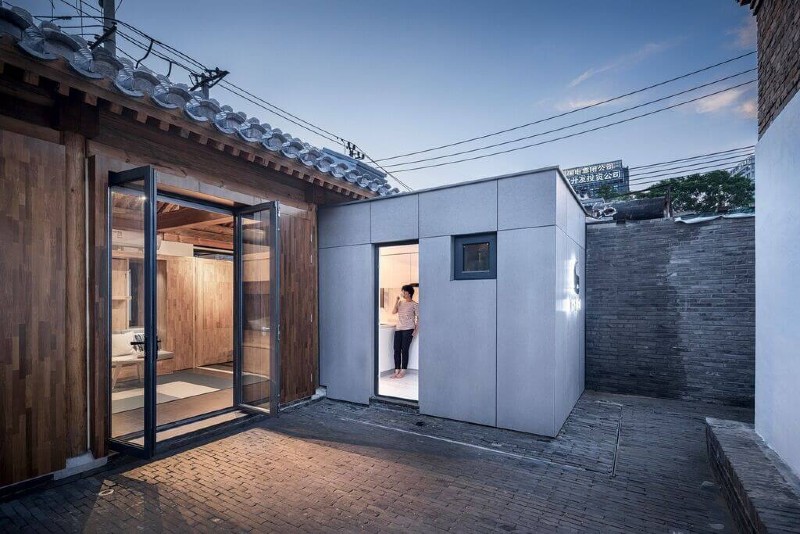 Now, this is one of the most futuristic modern Chinese homes found in Beijing, China. The home belongs to a tech company that focuses mainly on smart homes. The building has a wood frame that shows the traditional Chinese houses of old and all the interior partitions removed. 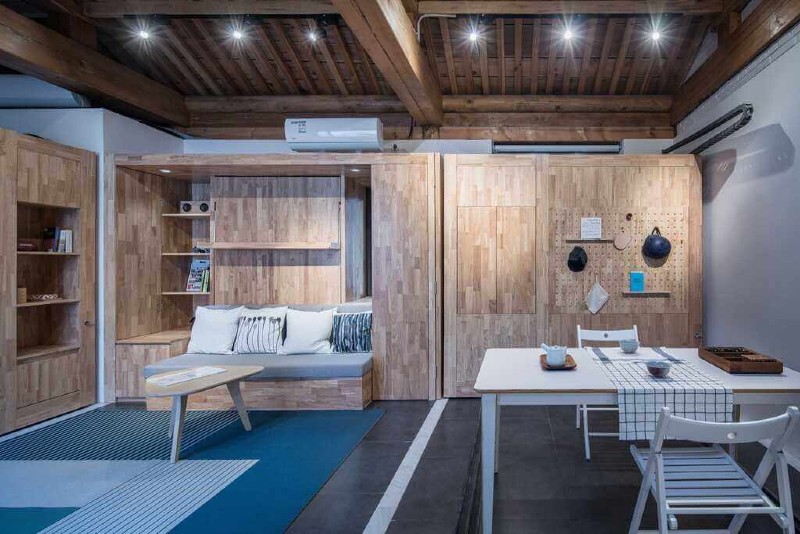 There are two moveable pieces of furniture, with one fixed placed underneath a new roof. The home has four different layouts using these moveable modules. So you can use it as a small office or three bedrooms.

In contrast, the facade opens up, connecting to an outdoor living area. The best part of these modules you move around using your smart TV. How great is that?

Arch Studio transformed this Beijing hutong into a tea house. Around the tea room, you see curving glass walls enclosed with bamboo courtyards. 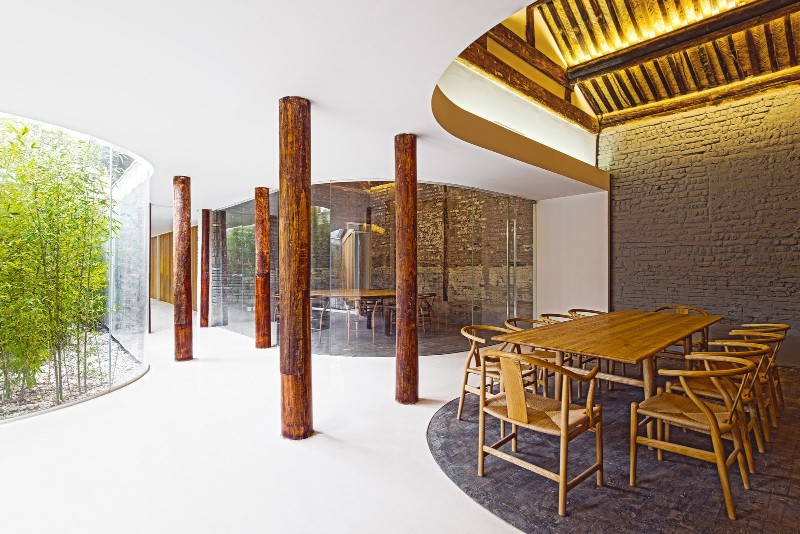 There is a pivoting glass door found in the alley leading from the street to enter the building. As you walk through this structure, you see private tea rooms throughout the place. Each room has a slatted door leading to the yard. 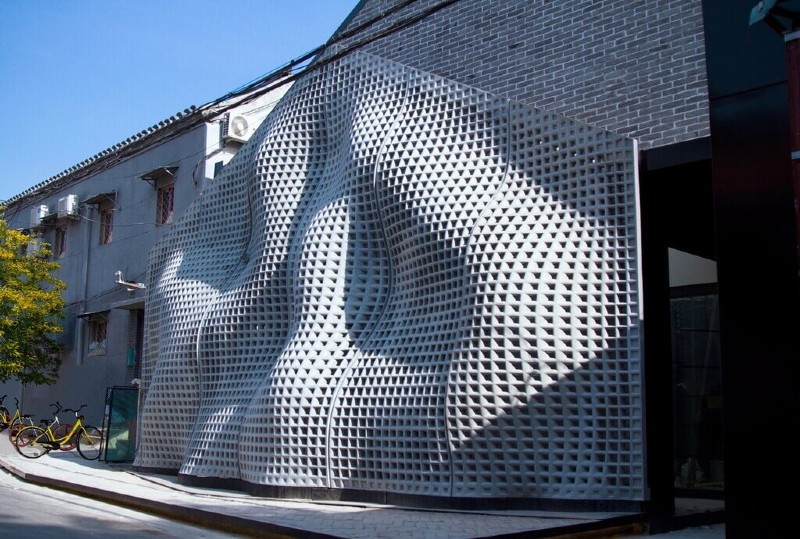 Another fabulous place showing modern Chinese architecture is another structure in Beijing. Nothing is more spectacular than this. The concrete billow designed by AntiStatics Architecture is a show stopper for people walking by the building.

It looks like the rolling fabric of a tent instead of concrete further. It also allows daylight to flow inside while keeping privacy. While at night, you see the iconic figure of Chairman Mao reminding everyone of the history of the site.

Here you can see how TOWOdesign maximized the place in a small living space. They used rotating boxes with pops of color to make a modern home. 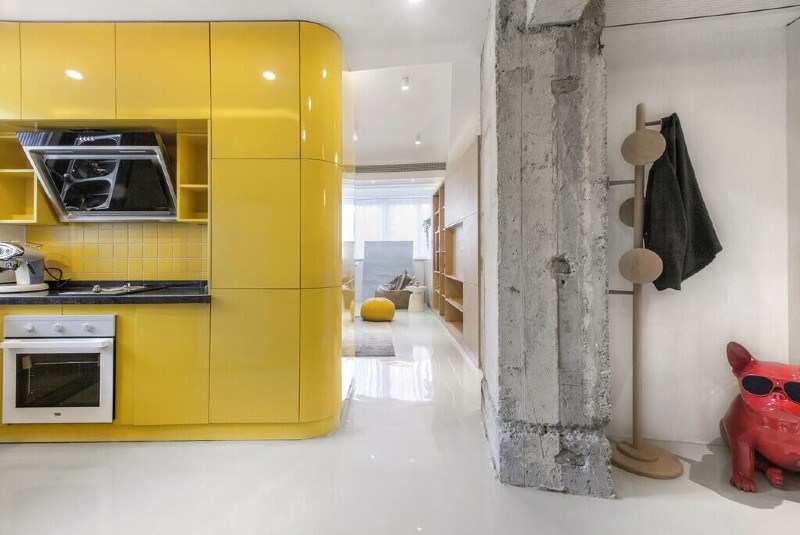 Four working boxes are made up of the bathroom, bedroom, entertainment section, and kitchen. Finally, in the interstitial space, you find the living and dining rooms carved out. 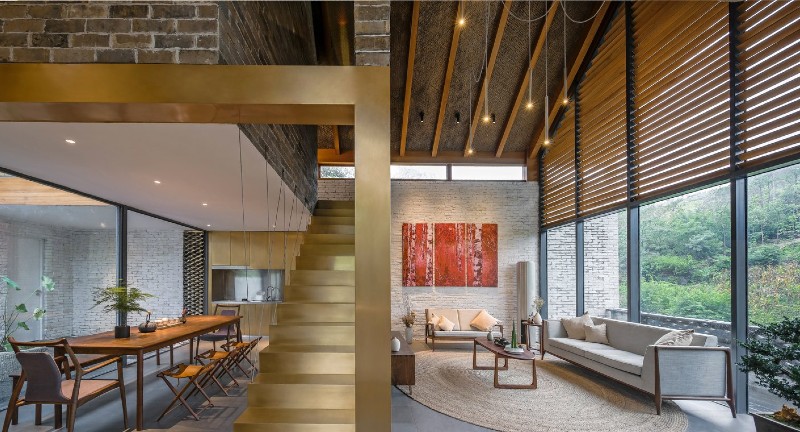 The small tongling recluse fund in north Anhui province in China was re-designed by Ziyu Zhuang of RSSA. He rebuilt the home from a poor condition by keeping the old but adding a modern touch. 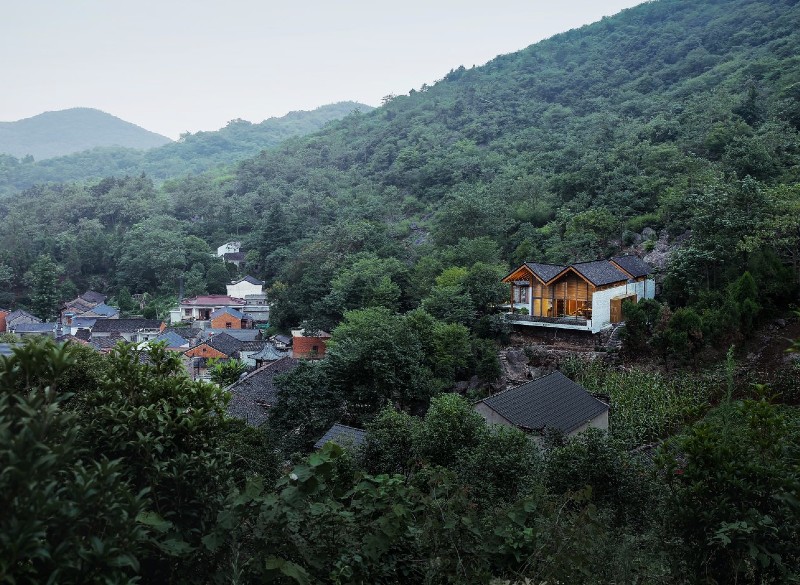 The layout was amplified to provide the house with views of the countryside while letting in sunlight. Every bit of material used in the buildings is modern, from brick to wood construction. 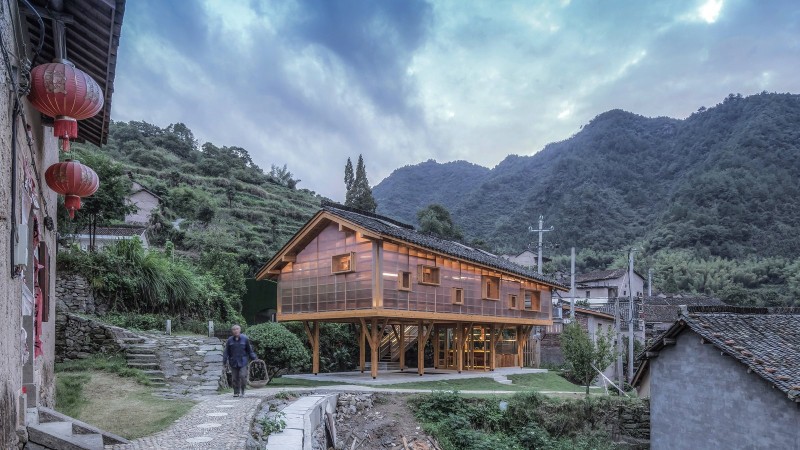 You find this home located in the forest in Wuyi County in the Zhejiang Province. The book house is surrounded by mountains in the south that is covered with thick forests. When you step inside on the first floor, you have an outdoor open space with structural columns. On the second floor are the closed areas connected to the outside with a staircase. 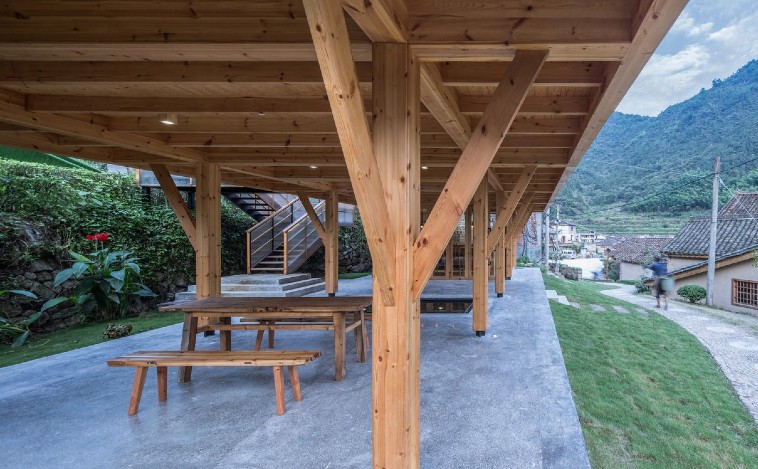 There is a small water bar on the first floor with beverages while the other places are open for the villagers to come in for a chat and drink. There is also a playground for the kids. 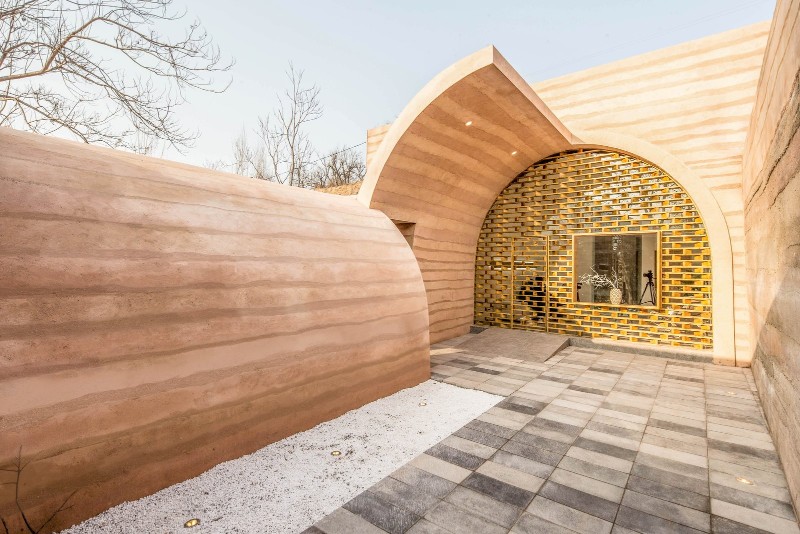 The contemporary-styled residence makes you think of the Minecraft cave homes in the game. You find the dwelling in the Shaanxi province looking very stylish. 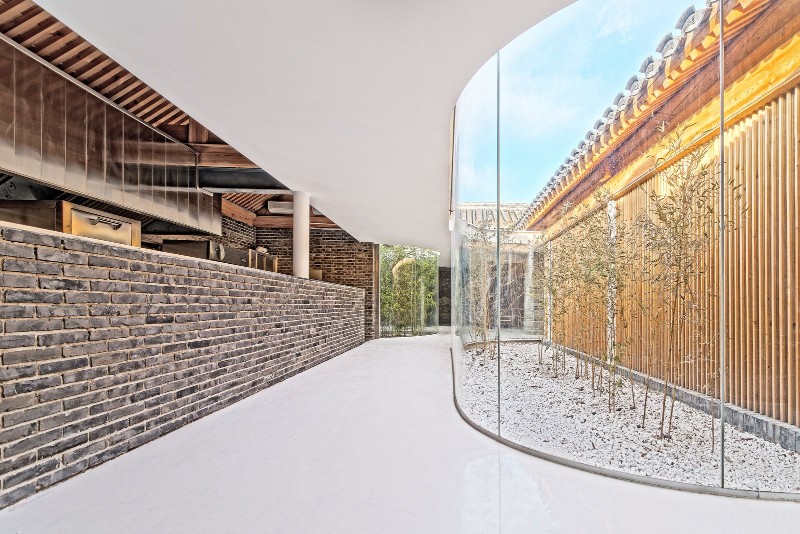 For the renovations, the architects used sand and clay from the mountains and helped to regulate the home’s temperature. Architects transformed the main entrance with a wooden facade with a glass curtain wall. Even the interior is spacious and very livable with enough light entering from outside.

As you can see, the modern Chinese houses may all have the same south-facing entrance build, but they differ in designs. Nevertheless, these are some excellent examples of modern Chinese architecture.