What is a Colonial House Design 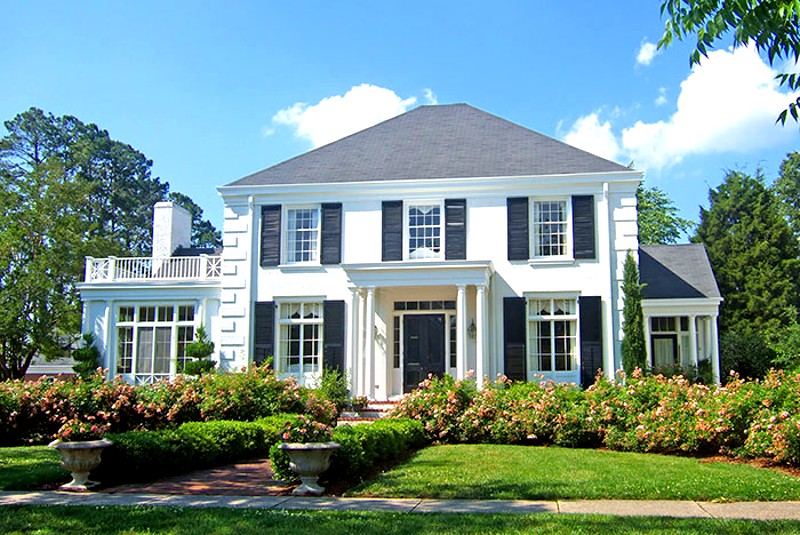 American Colonial architecture has come a long way. The styles found in most colonies during the 1600s to 1700s spread from:

The country had settlers from around the world that inhabited parts of America. Still, when you look at American Colonial architecture, most of it is from the British Colonial style. The reason is that America was under the rule of Britain for a long time.

Therefore, British Colonial architecture is not as defined and is a mix of the above. The Americans used local materials to build their home according to the styles of European countries. They learned the construction techniques making their changes.

When you look at the different Colonial style homes distinguishing them apart is difficult as they have vast aspects you need to consider. The reason is that other parts of America had various materials available to use.

Yet, when you look at the American Colonial designs found in urban areas, they do not look exactly like the French colonial architecture or the German Colonial style. So, here we look at some of these essential elements.

Many of your Colonial-style homes has a soothing yet visual symmetry. You find columns, doors, and windows with other elements on the exterior. These ornaments reflect from one side to the other, while the interior is a mirror image on the main level.

The house has a uniform style that is visually appealing yet practical. In addition, the square shape with rectangle windows makes it easier to modify if you want to update them.

Depending on the geographical influence, you can find this style house with up to three stories. Some layouts are more efficient compared to others. Yet, when you look at the modern Colonial styles, you find they have an open concept compared to the older designs with separate rooms. You also see the ceilings are lower.

Another feature commonly found in your Colonia homes is the steeply pitched roof and a staple design found in many homes. The reason is that it allows for drainage and works well if there is no second floor.

With the simple half-story design, it pairs well with a pitched roof. Further, the space available served as an attic and has dormer windows.

While many of the homes from the Colonial era used materials they had available. Thus, you found bricks used often on the facade. Yet, the modern approach is still compared to the historic times seen on the clapboard siding.

The facade is plain with brick patterns, yet things changed from using neutral colors, giving it a colorful accent from a painted red, blue, yellow front door moving away from the dull look. Using paint lets the elements stand out without making things look too bright.

Another standout feature found on the exterior walls of the house was decorative shutters. After that, people started painting the shutters in yellow or used black colors. Further, colonials added modernized features but still kept the distinctive vibe.

Entering the home of the American Colonial-style home, you found yourself walking through a center entryway. Doing this was a realistic way to provide entrance to the stairway leading to the upper floors. Next, you would walk along a long hallway reaching the middle of the home.

But if you had to restore such an old home for the interior, it would become a challenge. The interior should mirror the image on the exterior. You found that people had vintage furniture made of wood as it brings out the rustic look.

Then you had your attic with wooden beams also found present in the bedrooms. Many of these homes had two chimneys providing the living space with a fireplace to warm up winter.

Here we take an in-depth look at each of these styles that developed into the modern Colonial homes you still see today. 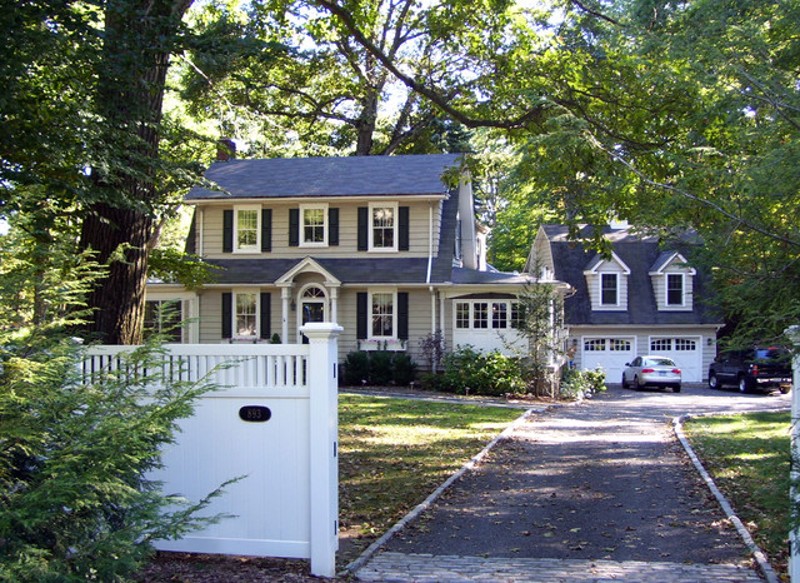 First on the list is the Dutch Colonial house styles. You see them in New Amsterdam, Hudson River Valley, and yes, they named the city everyone knows today as New York. The resident’s homes had two stories made of stone or bricks with a gambrel roof. 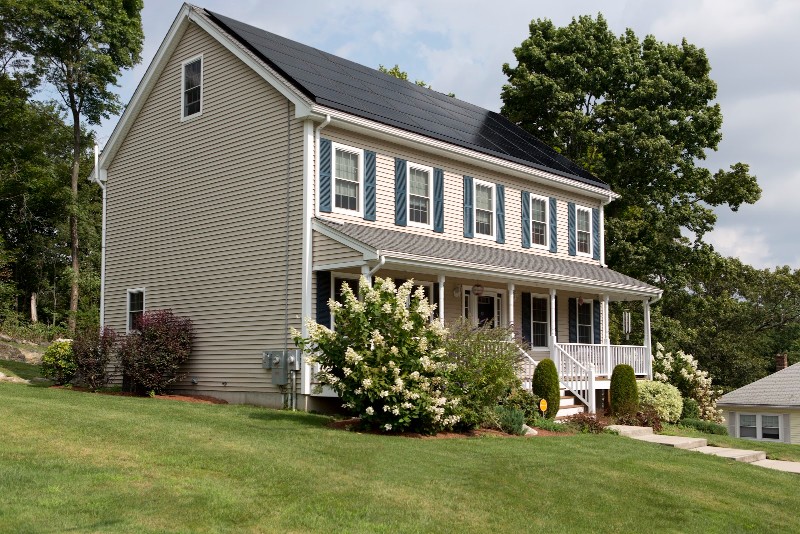 The British Colonial homes, you find mainly in the northeastern areas of America. For example, New Hampshire, Massachusetts, New York, Connecticut, and Vermont. The settlers mostly were British and built their homes with a timber frame, casement windows, two stories, and a rectangular shape.

British Colonial architecture with a side-gabled roof, and do not forget the chimney in the center. The fact is that a Cape Cod home is an England colonial-style home. It is a humble place with a one-story structure made to withstand the weather. 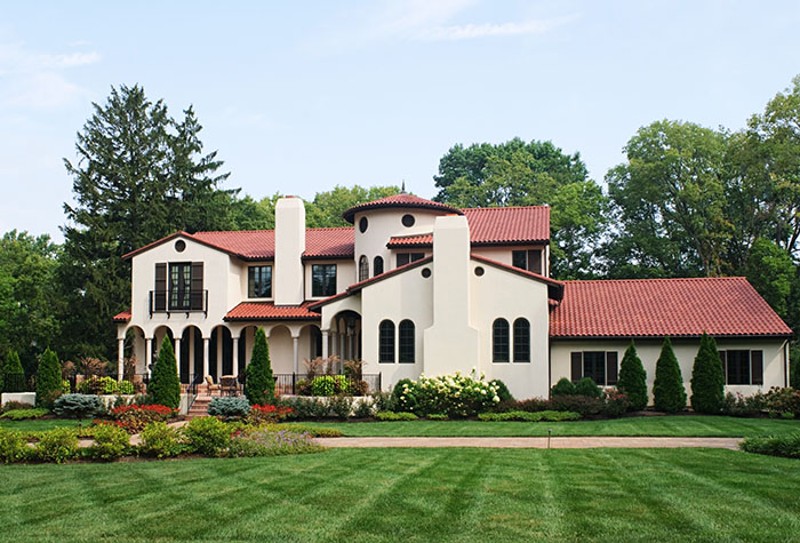 The Colonial-style house you find in the southwest in Florida, California, and your modern-day Texas. People used crushed shells, adobe, stone, and wood to build their homes. The roof was flat with a low pitch and covered with earth comprising a thatch with red clay tiles.

The homes have a rustic feel to them with thick walls and small windows. You find them covered with stucco to help reflect heat. You can still find these homes preserved in the suburbs, such as St. Augustine, Florida.

Settlers from the northern European nations arrived from Finland, Ireland, Sweden, Germany, and Scotland. The majority of these architectural styles have a stone construction with thick walls. In addition, you notice hand-hewn and timbering beams. 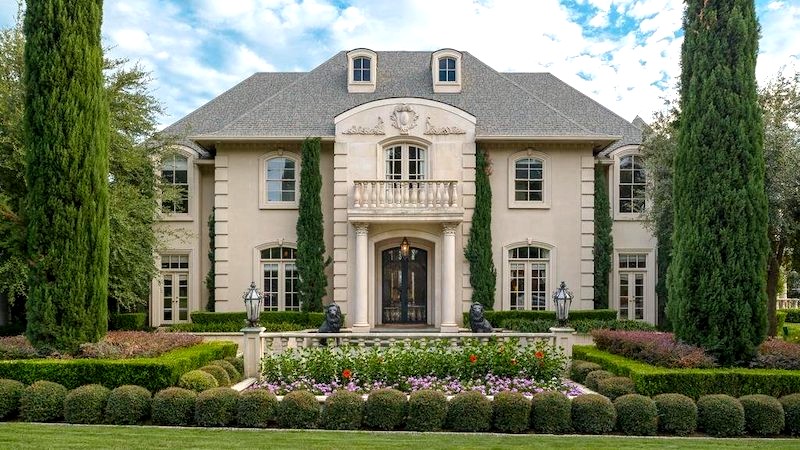 In the southern part of the USA, the French colonists settled down in the Mississippi Valley and Louisiana. As a result, the architecture style is known as “Creole.” This is because it combines architecture learned from West Indies, the Caribbean, and Africa.

The design could handle sweltering weather. The settlers used cedar logs that they placed vertically with a hip roof raised on piers. As a result, you have wide-open porches surrounding the home. 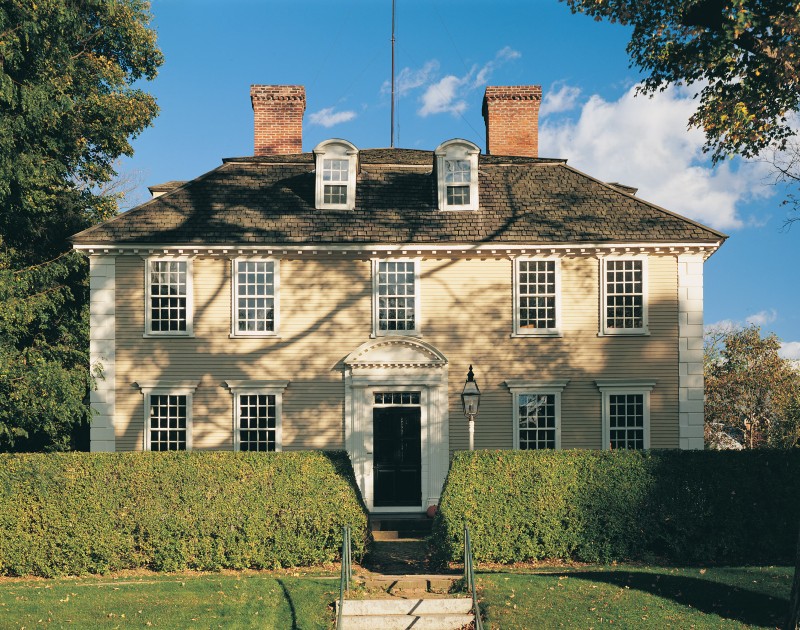 When the 1700s arrived, more families were building elegantly styled buildings imitating the Georgian style you find in Great Britain. The design focused on grandeur and ornamentation built with bricks. The homes were tall with a rectangular yet symmetrical facade.

You had large windows while the roof had one or two chimneys. Everything about the home is spacious yet comfortable, with a dining room and living area. You found the bedrooms upstairs.

What Style is Your Home

So what style is your home? Is it a Colonial-style house, or are you living in a modern-designed home? Not sure, then check out these styles to find out: 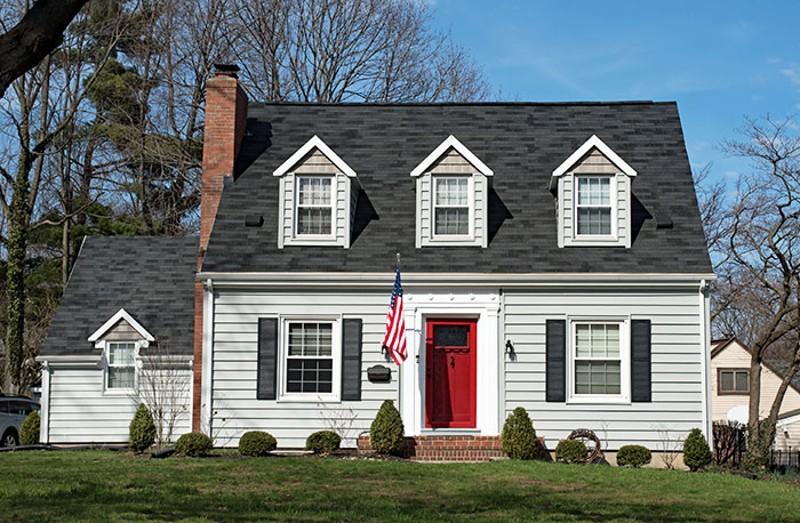 The popular style dates back to 1675, with its roots only making their way into the USA in the 1930s. You found these homes without a second floor and have a steep roofline. You can notice the wood siding with multi-pane windows.

Stepping inside, you see wooden floors, and these homes were tiny with dormer windows. If you want to add more space, you can add an addition on the back or side, depending on your site. You may even find you can add a living area upstairs as it might not be complete. 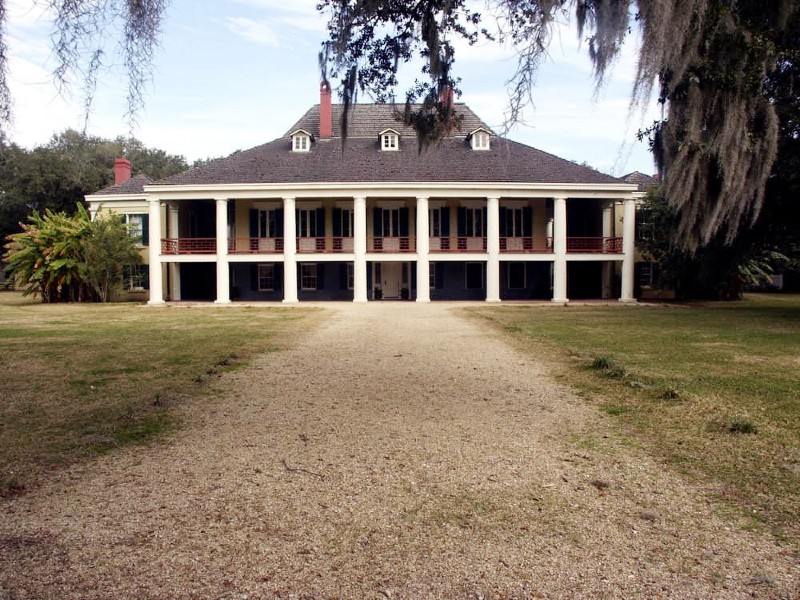 Back in the 18th century, France occupied the eastern parts of North America. After President Thomas Jefferson took over Louisiana, the building tradition faded, but the house style remained.

The home is one-story but has loads of narrow windows paired with shutters, and yes, it has either a hipped or side-gabled roof.

You have stucco walls with a timbered frame, and do not forget the curb appeal with stunning landscapes. 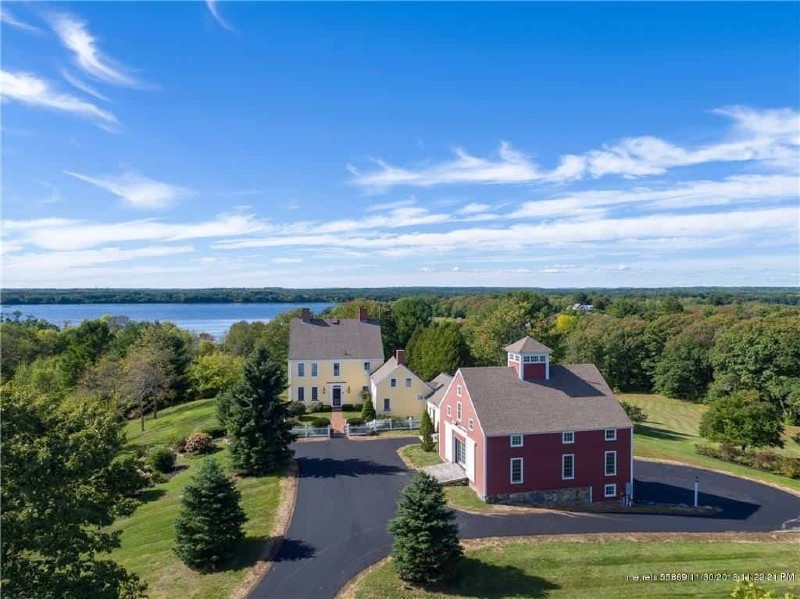 This Colonial-style house dates back to 1876 and remains a popular style in the USA. Maybe you have this home with a two or three-story design. Inside, you find a fireplace with wood or a brick facade.

On the first floor are the kitchen and a family room while the second floor has the bedrooms. What makes this home unique is that you can add more space at the back or side. 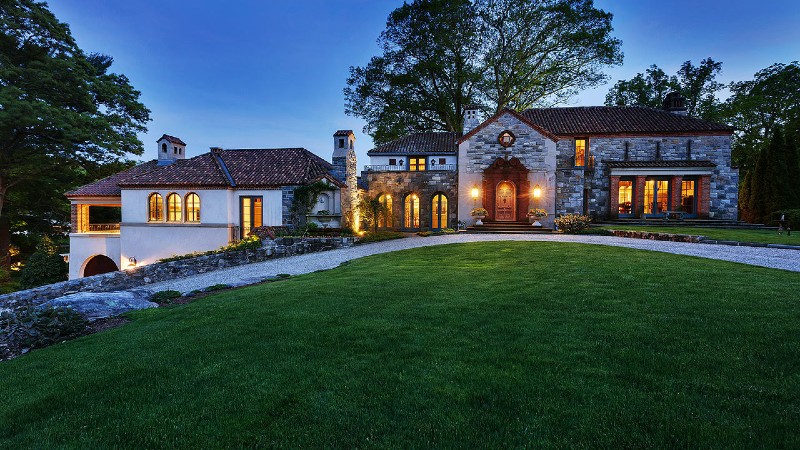 Now, this Colonial-style house is also known as the Spanish eclectic or farmhouse. They date back to the 1920s and 1930s. These houses have a low-pitched roof with red tiles, as mentioned earlier. In addition, you find arches with grillwork and stucco on the exterior.

Many of these living spaces are oriented around a courtyard found in the middle with a fountain. Another striking thing is the doors from the bedrooms open up into the yards. 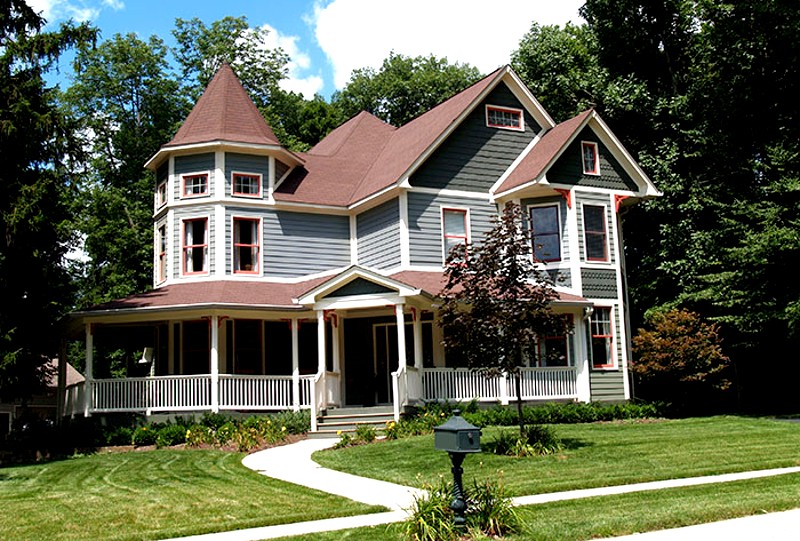 Or perhaps you live in a Victorian-style home dating back from the British Colonial era from the 1800s to the 1900s. These homes have a distinctive yet romantic look filled with details in the fabric and patterns to color textures.

In these homes, you can combine the Victorian with a contemporary feel. The building has a steeply pitched roof with a front-facing gable and shingles, and cutaway bay windows. The asymmetrical facade stands out with a full or partial porch.

Whether you live in any of these Colonial houses, you can make each of them your own by adding a touch of modernity to them. There are no rules as you can find elements of all of these designs in one home.

But remember, avoid hodgepodge styles as understanding the style of your house, you can add a touch of personality without removing too much of the Colonial architecture making the house.